There’s no doubt about it . . . women are making major moves.  Stats will tell us that women are starting businesses at a rate twice that of men, and the number of female CEOs has increased by 75% in the past decade. Professional degrees (in law, medicine, and business) awarded to women have more than tripled, as have the number of public offices held by women. Hillary Clinton is a strong candidate for the 2016 race, making it a real possibility that the next leader of the free nation will be a woman!  So, what’s changed? We once depended on our husbands and fathers to support our livelihoods. If we did work, we were inclined to low paying “helping” professions.  What’s caused this shift in which women are availing themselves to more options and  gaining access to higher profile, higher-pay positions of power and influence?

A glance back in time will tell us that the feminist movement of the 60’s and 70’s, which sought to dismantle workplace inequality, opened the door for women to make leaps and bounds in the workforce.  However, as we see with affirmative action and the ever-present disparity between minorities in corporate America and their white counterparts, access does not ensure attainment.

So what makes these women chose to go for the gold?  We will call them “alphas”.  They are confident and ambitious, with sharp intellect and a list of accomplishments a mile long.  They excel among their peers in academia and climb to the top of the corporate ladder. The new generation of alphas are embracing the balance between family and work. They plan to “have it all” and don’t believe in having to choose between a stellar career and a fulfilled home life.   I’ve found that much of what sets these alpha women apart is how they are raised and socialized.

*If you hope to raise an Alpha girl, read on and be sure to check back every week for my continuation of  this post.  Rather than cramming everything into one post, I’ll go in depth with a new pointer every week.*

While researching alpha girls, I came accross a study conducted by Harvard professor, Dr. Dan Kindlon, in which he identifies “alpha” girls  from within a pool of 900 teen girls and boys.  One of his goals was to understand what makes the alpha girl  tick.  His definition of an “alpha” included the following:  a GPA of 3.8 or higher, highly motivated, highly dependable, involved in extra curriculars, and at least one position of leadership.

There’s no question that if a young lady possesses these qualities, she’s on the path to success. So what makes an alpha become an alpha?  Here’s the first pointer I pulled from Dr. Kindlon’s study, as well as my personal experiences and working with clients . . . 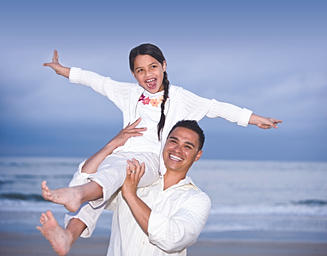 The alpha girls in Kindlon’s study were much more likely to have solid relationships with Dad than non-alphas. Like it or not, children benefit most from absorbing the strengths of both sexes (i.e. emotional intelligence from mom, attention to logic and structure from dad). For alpha girls, it goes beyond the “need to feel loved by a man” reasoning that typically explains why girls need their dads; when a girl spends time with her father, she becomes more versed in “males ways of being”.  Also, the vigorous and more physical play that fathers tend to engage in can lead to enhanced brain development and improved sense of humor.  It also enhances her risk-taking muscles.

Fathers are likely to teach their girls not to be afraid and can model how to relate to men in competition, which will help her navigate male dominated areas, such as business and politics. Looking back, I have one memory (that’s actually quite humorous) of my father teaching me not to be afraid and use “male ways of being”.  Back in high school, a certain peer who will remain nameless approached me after school, threatening to fight.  She pushed me a couple of times and our mutual friends stepped in to have her back off.  I went home and told my parents. Now please don’t get me wrong, my parents don’t encourage violence, but my father was not going to have his baby girl be attacked and unable to defend herself.  He showed me how to block and defend myself.  Fortunately, I didn’t have to use any of my newfound skills and was able to arrange a mediation, but I walked into school the next day feeling more confident and a bit less anxious than I had when she originally approached me.  That was  something only my father could provide.

So mothers, please encourage quality time between your alpha girl and her father.  Let him take her to  the park.  Let her play “boys’ games.”  Let her get dirty!  While class and sophistication are always  relevant, old school ways of “being the perfect lady” and “tending to women’s work” will not serve her in  this competitive world, run largely by men. Being familiar with “male ways of being” will help her to be more  well­rounded.  If you purposely prohibit your daughter from seeing her father because of your of personal  qualms with him, perhaps you should reconsider.  And for you mothers-­to-­be, please choose your mate  carefully; his contribution is imperative to your alpha girl.

Find out how Kaity can help you live better at www.kaityrodriguez.com

Visit her coaching, makeup artistry, and speaking pages. Then call (862) 200-9051 or email kaity@therolemodelgroup.com

The inspiration for JGH&W.com came from a blog that Janice Woerner wrote in 2010 when first diagnosed with breast cancer. She created Jersey Girl Health and Wealth.com to connect those affected by breast cancer and provide resources including where to get the best wigs, lingerie, therapeutic services, yoga classes...to name a few. Read More…

JGH&W is sponsored in part by: