“So much good can happen over a cup of coffee”.

Jaime takes to the floor at the front of the room and the energy immediately goes off the Richter.  In the main ballroom at The American Hotel in downtown Freehold, NJ, we’ve gathered for some good ol’  “cawfee talk”, based on the digital series supported by the Keurig company. Over 200 women have come here to meet Jaime and soak in her sunshine.

Jaime Primak Sullivan is a NJ native who has found herself now living in Alabama with her husband and three children and she’s doing it without compromising her “Jersey Heart”. Where most people would make it an effort to assimilate to the new region of the country, she has found them assimilating to her.  Her “square peg in a round hole” story has been depicted on Bravo’s “Jersey Belle” – a refreshing detour from the hair pulling and drink throwing programs that have become the network’s bread and butter.

Today Jaime is in NJ to spread the love. In addition to her Public Relations company (www.bridgeandtunnelentertainment.com), she is dabbling in screenwriting, producing and, from what we have witnessed today, inspirational speaking. What began as a video clip posted on Facebook, simply to speak out to her fans, has developed into an entire digital series where she posts daily videos to give her fans a “pep talk” to get them through whatever it is they may be tackling in their lives. By sharing her experiences and advice, Jaime has nailed the “me, too!” connection with her fans. She is the woman you want as your friend, sister, co-worker, etc. She knows it, and she’s doing her damn best to make it happen. She works tirelessly at making connections with all that reach out to her. A once proclaimed “bully” has made it a mission to testify her story and implore us to choose kindness over aggressive confrontation (let’s face it, exactly what people from NJ have now become synonymous with).

“Those who hurt…hurt”. A powerful statement by a woman who has admittedly fed off the depletion of others’ power at her hands in order to feed her own insecurities. Her bravery in opening up her wounds to us, in turn gives us the courage to take stock in our own accountability. Don’t beat yourself up. Learn from it and move on.
“People always ask me how I balance it all – work, family, marriage…I don’t. Some days I suck as a mother, some days I’m a good wife.” She stresses to us to NOT stress. We’re not perfect, never gonna be, so get over it and just do your best.

It doesn’t hurt that she is flat out hilarious. She laughs at herself, and therefore gives us the license to laugh at ourselves, as well. She exudes that “Jersey Girl” sensibility we can all relate to. Down in Alabama, she rocks black leather jackets, big hoop earrings; she mourns the lack of diners, clubs and disco fries. “Down south, they don’t even say ‘Fuck’!”

After speaking for almost two hours, she stands and takes pictures with all the attendees.
Does this woman not pee?! Isn’t she hungry?!
Probably. But she sucks it up…for us…her people on her planet.
Maya Angelou once said “I’ve learned that people will forget what you said, people will forget what you did, but people will never forget how you made them feel.”
Through all her powerful words, her jokes, her hugs…what we will all remember most is how Jaime made us feel.
“I’m just getting started”, she proclaims.
Well, thank goodness, (and I don’t always quote Melissa Manchester) but… 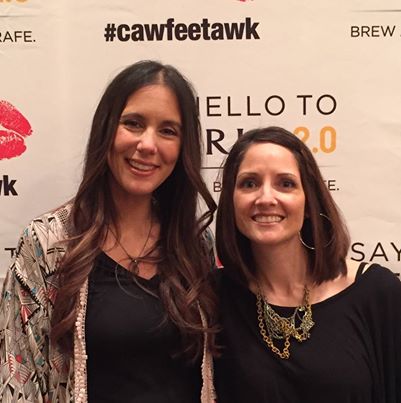 The inspiration for JGH&W.com came from a blog that Janice Woerner wrote in 2010 when first diagnosed with breast cancer. She created Jersey Girl Health and Wealth.com to connect those affected by breast cancer and provide resources including where to get the best wigs, lingerie, therapeutic services, yoga classes...to name a few. Read More…

JGH&W is sponsored in part by: